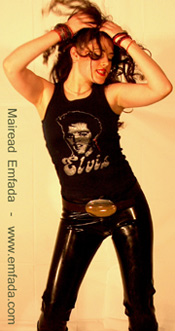 
:)
*Studio Time* Mairead is back writing and recording tracks in her own home studio. Incorparating various electronical & accoustic experimental soundscapes. The only clue we get is that it's everything but funk! 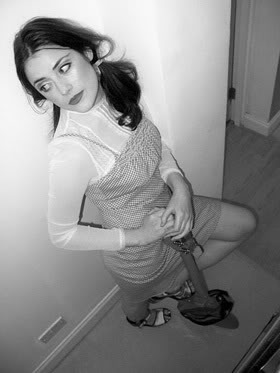 Mairead says: "Funk was a superficial role I played... that's all... As a performing artist I played it as I like to have a laugh and because I really like to dance.I am a very physical person." Even though I play it with all my heart, it becomes all a little meaningless to me in time. It's important to follow ones true path. So I'm back to reality doing what I prefer... as it is much more ME... I am Mairead Emfada the moody artist. I get involved in the whole recording/production process.I get charged up. Noone can tell me what to do. I push myself right in emotionally, I let myself be dragged through the jagged edges, it hurts a lot and I become the music. Making music is a balance of pain & pleasure. I get highly temperamental about each sound selection, which builds the atmosphere of the track. And yes, computors still crash on me!!!" "


Archive/Old News: JULY 2006
- V SPECIAL THANKS -
A MESSAGE FROM MAIREAD EMFADA TO THE MOSA FUNK: "SUPER 'THANK YOU THE MOSA FUNK CLUB BOYS (Rob, Cammy, DC & Joel) FOR BEING SO AMAZING, IT'S BEEN A BALL GUYS.... A GIANT FUNKY BALL! FUN AND A LOTTA HARDWORK. HERE'S TO REMEMBERING THE GOOD TIMES ALWAYS GUYS. BEST WISHES. XXXOOO LOVE & PEACE!!!
ALSO A SPECIAL THANK YOU TO ALL THE MOSA FUNKER AUDIENCE TOO, ESPECIALLY THOSE OF YOU WHO REALLY DID "GET DOWN & BOOGIE!!!" YOU MADE IT FOR ME. LOVE U ALL- ALWAYS. PEACE! KEEP UP THE FUNK NOW, MOSA STYLE! BYE"